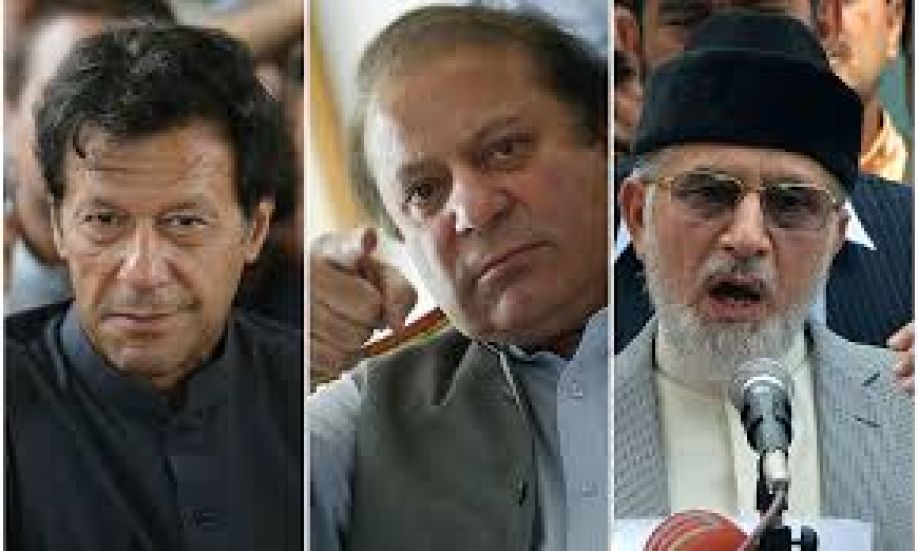 The stalemate lingers on

Islamabad: The good thing about Pakistani politics is that nothing changes in a matter of weeks. You return to Parliament after a long vacation and find the political stalemate lingering on, except that the pendulum seemed to have swung slightly in favour of the PML-N government.

The parting of ways by Tahirul Qadri seemed to have punctured the dharna mast. The Constitution Avenue had partially recovered its glory. Gone were the baton-wielding PAT urchins who relished physical searching of the snooty Islamabad journalists, sarkari babus and the uniformed personnel who had to pass through the area to simply do their jobs. Also gone was much of the stench and filth that violated the sanctity of the symbolic structures that represented the will of the people. Maulana Qadri, who loves to lecture on every thing under the sun, perhaps forgot to sermon his followers a tad about the Islamic virtues of hygiene.

However, Imran Khan remains entrenched in one corner of the so-called D-Chowk. The sit-in may have lost its ferocity and mystique, which was largely created by an over-arching halo of conspiracy extending from Rawalpindi, London to as far as the North Pole. Yet the Big Khan vows to keep the D-Chowk aflame even “if he had to live alone in a tent.” Brave words indeed! We really don’t know what to make of this. Even his party stalwarts are not sure whether to love him or hate him for this. What we know is that Imran is unlikely to translate his gains into political objectives if he goes ahead with his plan of appearing in Parliament on Wednesday (today) to solemnise PTI resignations.

The gamble is likely to leave behind a hazy trail of unknowns. The resignations would deny the PTI the chance to contribute in electoral reforms, which was supposedly the main objective of its movement. The resignations, many say, might have had a bigger impact if Imran Khan had given them at the peak of his dharna. What if many more in the party refuse to resign? Will the PTI also resign from the KP Assembly? It is a catch-22 situation either way. If it is about principles then the PTI should resign from everywhere. The party, if it resigns from the KP Assembly, might confront an AAP-like situation, which got wiped off in India’s national elections as it failed to deliver in Delhi. The PTI is yet to deliver on its promise of an ideal KP government. There is a plethora of questions that surround the resignation issue.

This just might be the reason that the PML-N was found relaxed in the National Assembly. It was beginning to give vibes of victory, perhaps too early. Things seemed to have returned to old PML-N ways. The session started late with hardly any quorum in the House. The front rows of ministers were, once again, missing. It was only when Prime Minister Nawaz Sharif came to the Assembly that a few ministers cared to turn up.

One can’t blame Nawaz Sharif from staying away from Parliament. The moment he entered the House a beeline of backbenches swarmed him one after another to give him applications. We could guess that most of them were requests for exemptions, quotas, licences, appointments, transfers and postings of their kith and kin, mostly in violation of standard rules. This is what governance is all about in Pakistan. Nawaz Sharif gets good marks as benevolent and magnificent in the party if he obliges his members. Who cares if this leads to a travesty of the rule of law and justice? He is dubbed as arrogant and rudely inaccessible if he doesn’t. This might be the crucial test for Nawaz Sharif, which will define his third tenure as prime minister.

This might also be the crux of Nawaz Sharif’s dilemma. His power rests on the patronage system where he obliges a grand mix of turncoat ‘electables’ through such ad-hoc bounties. But then he desperately needs to come up with drastic out-of-the-box solutions to appease the masses who, like it or not, have been galvanised by Imran Khan’s rhetoric.

Surely, Imran was able to put the complacent PML-N government on the defensive on its dynastic style of governance. He successfully drew public attention towards the elitist monopoly over power where ordinary folk have little chance of getting justice. It is crucial for Nawaz Sharif to neutralise this perception. The issue is how to go about it.

The Cabinet reshuffling and expansion is important, as the present lot has miserably failed to deliver. We saw the whole ruling party stirred up into action lobbying for a place in the Cabinet. Somehow the Big Four in the Cabinet are over confident that the party does not have the guts to change them. Maximum, there might be a change of portfolio but it should look like an elevation rather than demotion. Or so they believe. We keep our fingers crossed as Nawaz Sharif, we are told, means business this time around. The lot of junior minister and new entrants is having sleepless nights. We saw Anusha Rehman suddenly taking credit for enlisting Pakistan in some UN fraternity, forget the billion dollar grey traffic that continues in her ministry. We also saw Marvi Memons of the world giving look-busy impression jumping from one seat to another to show ‘performance.’ Even Ejazul Haq elbowed his way in to sit with the Prime Minister to clarify old enmities. Senator Abbas Afridi refuses to leave the front Cabinet row lest Nawaz Sharif forgets to give him a portfolio this time. But, then, is Cabinet reshuffle the answer to Nawaz Sharif’s problems?

The malaise, it seems, might be much deeper than that. It is yet to be seen whether Team Nawaz Sharif has any bright ideas to address what ails our society. Of course, the key areas are economic, energy and security. But then it is much more than that.

Tailpiece: We just hope that Nawaz Sharif gives us solutions in tangible form and not in the domain of spirituality as offered by one of his ministers today. Riaz Pirzada was asked about the steps that the government might have taken to avert any damage from the up-coming cyclone in Sindh. He said that being the scion of a spiritual family, his prayers were more powerful than the disaster management authority. As simple as that!