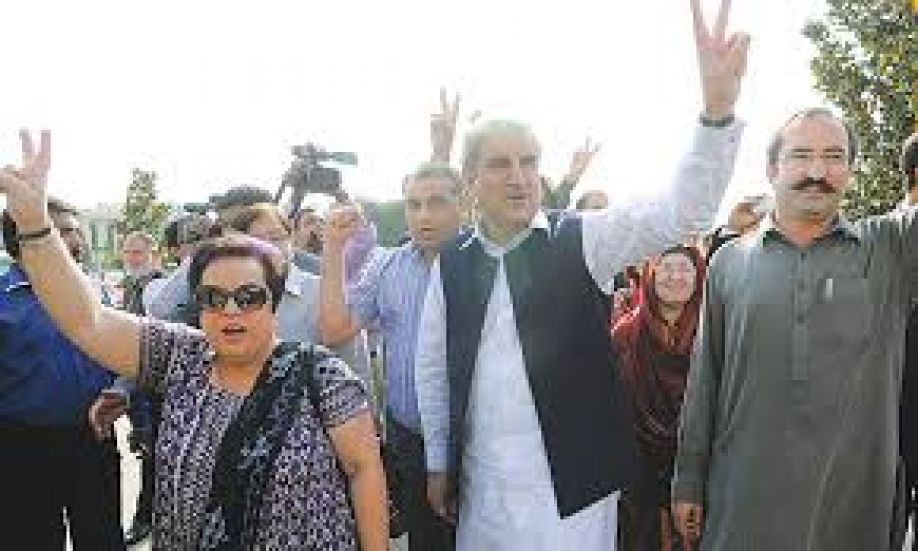 ISLAMABAD: Why doesn’t the PML-N get it? We all know that the PTI wants the National Assembly dissolved as it believes that it’s fake, redundant and what not.

The PML-N seems to support the PTI argument. Or so it seems from its revived practice of ignoring the Parliament. The trio of the Cabinet Big three — Ch Nisar, Ishaq Dar and Khawaja Asif — seem to have developed a certain anathema for the Parliament. Their presence in the House has become more scant than of the prime minister, who, by the way, is seen around more than his ministers. After all, it’s his neck that is on the line.

The problem is that the Parliament proceedings seem meaningless in the absence of the major ministers. For instance, one expected Interior Minister Chaudhry Nisar to brief us about the Muharram security arrangements particularly after the bomb explosion outside a Karachi Imambargah. Forget about the much-hyped national security policy and the ineffective National Counter-Terror Authority, Nisar needs to brief the House about the ongoing Zarb-e-Azb every now and then. Half of the assembly proceedings revolved around the war against terrorists. Abdul Qadir Baloch did a good job explaining the official concerns about the rehabilitation of the Internally Displaces Persons (IDPs). But Nisar was required to explain the larger consequences of what remains Pakistan’s biggest war.

The story about the energy issue was no different. PPP’s Khursheed Shah wanted to understand the logic behind the ever-increasing electricity rates. He continued to mention that oil price in the international market have downed from $116 to $86 but the prices of electricity has increased by 46 percent in the last six months. He believed that the average cost for an electricity unit is Rs7 whereas the government charges around Rs22. Will somebody explain why, asked the Leader of the Opposition. We don’t know whether to approach Khawaja Asif for the response or Punjab Chief Minister Shahbaz Sharif, whom the man from Sialkot blames in the Cabinet meeting for meddling in his ministry.

Khursheed Shah sounded ominous when he said that “the government thinks the crisis is over; let me remind you that the black clouds still hover all around.” He drew the government attention to the closure of Pakistan Steel Mills and minced no words in reminding the government that it should take the opposition along on its major policies “if you want our help.” It was difficult to say whether this was an advice or a warning. The reference was obviously about the PTI resignations. We all knew that the 25-member PTI squad was sitting in the Deputy Speaker’s office to tender its resignations. Our mole tells us that three PTI MNAs —Nowshehra’s Siraj Muhammad, Swat’s Saleemur Rehman and Fata’s Qaiser Jamal — have openly defied the party leadership over resigning. This takes the tally of PTI rebels to seven out of total 34 (after the earlier defection of three others plus Javed Hashmi). PTI claims Shehryar Afridi is unwell but has committed to abide by the party decision. This goes without saying that none of the PTI members wants to resign. All of them resisted Imran Khan in unison on Tuesday night but the Big Khan would not let their Big arguments come in the way of the Big Revolution. Imran’s final verdict was a resounding NO. Hence everybody lined up to appear before the Speaker collectively.

Unsurprisingly, the government took the refuge behind the argument that every PTI should appear before the Speaker individually. This amounted to buying more time besides checking out if more PTI members were inclined to defect from their party ranks. It was easier for the PTI as well to simply go in the House and announce their resignations as was done by Javed Hashmi. They might just do it on Thursday (today) as claimed by some PTI stalwarts. But the question remains: how big this will be a jolt for the government.

Obviously, this does not auger well for the still nascent democratic process. The government, pushed to a wall, might just go ahead and hold the by-elections. This will only nudge the PTI further to play the role of a more aggressive spoiler, which could keep the polity more dead-locked. But this does not resolve the PTI problems. Who will force the governments in Balochistan and Sindh to dissolve Assemblies – even if the PML-N is pushed to hold national elections?

For all we know even Pervaiz Khattak has simply refused to oblige the Big Khan. This is why the PTI defies its own logic by not dissolving its own KP government. The PTI stands to lose over half of its party if Big Khan chooses to impose his decision in the KP. And how will the PTI ensure that the Parliament drafts electoral rules in accordance with PTI taste after resigning from the National Assembly. Of course, this is more about the ego of Big Khan who wants to offer the National Assembly members as sacrificial lambs. If it’s really about political logic or principles, the PTI should resign from the KP Assembly also.

Whatever the case, the PTI resignations are likely to add to political instability. It’s a big gamble for the PTI. It is yet to be seen if Imran Khan could maintain the political pressure to force early elections or loses his gusto in the coming months or perhaps years. There is only one way that the mid-term polls are possible: if Nawaz Sharif chooses to dissolve the National Assembly. In a way, this will be a bigger test for Nawaz Sharif than for the PTI to hold on to his nerves. In the meantime, it will require more than a Cabinet reshuffle to ward off the upcoming political crisis. And why should the prime minister decide about the fate of his Cabinet in closed door meetings. Why can’t his ministers give their presentation before the Parliament for everybody to see their performance? As if we don’t know about it. If only they had worked half of what they will claim in their presentations, the PML-N government would not be facing the crisis that it does.