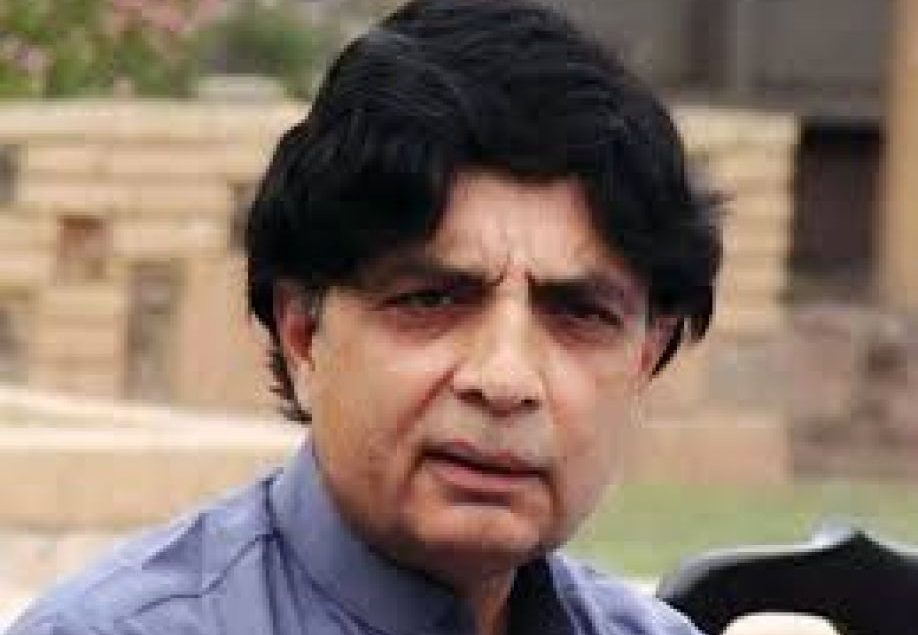 Islamabad—Chaudhary Nisar faces an unenviable situation for any politician. Anybody with weaker nerves would have given up politics and long gone home.

But not our man from Chakri! He stood his ground even when the PPP opposition walked out of the National Assembly twice in a single day.

Nisar seems to have a permanent fixture with the PPP. The last time he had used the T-word (tamasha) for the opposition behaviour, the Senate went on a month-long boycott and held its proceedings in the parking lot. We saw Round Two of his spat with the PPP recently when he had provoked Senator Aitezaz Ahsan with some offensive remarks. This had happened in the middle of the dharna war when the government could not afford to lose the PPP support against the PTI. A person no less than the Prime Minister Nawaz Sharif had to apologize to Aitezaz to bring the PPP back to the joint parliamentary session.

Round Three seemed almost like a repeat sequel of the earlier episode. Nisar has developed a knack for landing into trouble the moment he says something on the floor. The opposition was fuming over the use of “excessive power” by Islamabad administration against the workers who were protesting against OGDC privatization on Wednesday. Senator Raza Rabbani had taken up the issue in the Senate a day earlier. PPP’s Khursheed Shah followed it up in the National Assembly by boycotting the proceedings after invoking the spirit of Carl Marx to rescue the hapless labourers. MQM’s Rasheed Godel chipped in to uphold the working class revolution. So far, so good. Enters Jamshed Dasti who was booked a day earlier for supporting the rabble-rousers. He sat on the Assembly floor when he was denied to speak. Amid all this high class drama, walked in Chaudhary Nisar—perhaps for the first time in the ongoing session.

Nisar was politically correct to offer an inquiry. He said that he did not know that the administration had used such harsh means but asked for some ground rules for managing such rallies. What ground rules? The suggestion seemed funny after the D-Chowk mayhem. The PTI-PAT workers violated every rule under the sun and yet the administration did not have the guts to resist them. In contrast, a bunch of OGDC workers subjected to intense tear-gas and baton-charge for a much lesser crime. Then Nisar walked out while Khursheed Shah had taken the floor to give his opinion. This was seen as an affront by the otherwise dovish Khursheed Shah who went on to blast the PML (N) government: “you are not only blind but deaf too; it’s this very attitude that keeps causing trouble for the PML(N) government.”

The leader of the opposition went on to walk out second time in a row. Nisar returned after a while and wondered “why should the opposition stage such tamasha.” This was sure to keep the PPP away for the rest of the day—if not the current session. Half of the opposition is already on the streets threatening to resign from the National Assembly. Nisar made sure that the other half walked out leaving him relish ‘sunjian gallian’ as it happens in Mirza-Sahiba episode. He had an unmatched political career as an eight-time continuous winner until he landed in the troublesome Interior Ministry. He was seen as the biggest stumbling block against the war against Taliban. In retrospect, his arguments about the consequences of the operation seem so inaccurate. He could be easily held responsible for a one-year delay in Zarb-i-Azb, which cost us thousands of innocent lives. One would really like to see how Nisar will defend his ministry’s performance in the much-hyped Cabinet overhaul exercise that is supposed to start today.

In the larger context, the government’s privatization exercise seems as good as dead under the circumstances. The PML (N) wasted its honeymoon year when things were much smoother. It could have at least convinced the stake-holders about the soundness of its plan. It will be worth watching how the government will proceed on such ambitious agenda in such divisive times. The PTI is all set to roll stones against any PML (N) policy. And the PPP too is not likely to play ball on the privatization issue. Here is the damned-if-you-do and damned-if-you- don’t PML (N) dilemma. The PML can’t get out of its economic morass if it does not sort out mess in loss-making corporations. Yet the unstable political circumstances leave little room for executing such a grand exercise.

Tail piece: The PTI resignation issue is turning out to be such a farce. It could have easily turned up in the National Assembly to solemnize the resignations. Obviously, nobody wants to resign. Big Khan has already lost 20 per cent of his members in the National Assembly (seven out of 34 members). There is a big chance that the ratio might shoot up if Imran insisted on his decision. Friday is the last day before the current National Assembly session goes for a break. Chances are that the PTI will while it away to extract more time, hoping that this might prompt Imran to rethink about his decision. We keep our fingers crossed.

Tail piece 2: It was funny seeing Raza Hiraj talking about democratic practices and political morality. The gentleman turned into a Patriot turncoat (lota) on the first day that he entered the parliament in 2002. Since then he has changed three parties in as many elections. Yet he had the audacity to talk about political scruples.

Tail piece 3: Sheikh Rasheed must be the most relieved person if Imran Khan changes his mind on resignations. He said he would have no choice but to resign if the PTI goes ahead with the decision. There would be by-elections in four national and eight provincial constituencies in Rawalpindi-Islamabad area. It will be a tough call for the Sheikh from Lal Haveli to stay isolated in such trying circumstances. Wrong qurbani—isn’t it?