The good news is that the NAB finally woke up to stop Port Qasim Authority (PQA) from giving further concessions to Malik Riaz of Bahria Town to build, if at all he plans to do that, the alleged Island City, 3.5 km off the Karachi coast.

Of course, Malik will continue to sponsor ads showing fabulous pictures of Dubai’s man-made islands besides announcements about building the world’s biggest Mall and the tallest building. No explanation is given about the equity; who will put in how much money and how. And this is about a whopping sum of $ 45 billion. But Malik Riaz keeps changing his figures as pennies in his pocket. After the Abu Dhabi Group backed out, Malik Riaz brought the figure down to Rs 15 billion investment through a news report from his ‘chosen’ editor and newspaper.

The figure was ballooned to $ 15 billion in six hours and then to $ 20 within 24 hours–interestingly propagated by the same media groups. Bahria rose the figure back to its original claim of raising $ 45 billion in its ads published by almost all mainstream newspaper. Only this time there was no name and face of the investor, except the promise that a consortium of Arab and Europeans will descend upon Pakistan soon to pledge the $ 45 billion just because “Bahria commits, Bahria delivers.”

Thousands of cases exist where Bahria has not ‘delivered’ with people running from pillar to post to recover their life-savings– Awami Villas (DHA phase-2 extension), Bahria Town Phase 9, DHA Valley, REHC, just to name a few.

What we have on the table is the grand arrival of controversial US investor, Thomas Kramer, whose net worth is $ 90 million. How will he bring in the promised money is yet to be seen. Malik Riaz shows a loss of Rs 107 million in his personal income declaration for the last three years (2010-12). He owes another Rs 107 billion in taxes as documented by the Federal Tax Ombudsman (FTO) and much more to investors whom he is yet to ‘deliver’ despite taking billions in advance illegally. Yet he keeps buying jet planes, the latest being a $ 20 million worth hawker Beechcraft that he bought last month, perhaps to facilitate the electoral candidates that he is supposed to ‘deliver’ from every political party. The likelihood is that he may not declare the $ 20 million in his tax records as he did not declare the Rs 850 million that he supposedly spent on Shahbaz Sharif’s Ashiana Scheme.

So the only concrete thing on ground is the dubiously acquired State land for which he invites investors.

The NAB, we are told, took notice of complaints under the Prevention of Corruption Initiatives regarding the award of contract by the PQA. This was done after several complaints from Transparency International, consumer watchdogs and nationalists. The Sindh Assembly opposition lodged explosive protest against the sale of the ‘motherland.’ It got provoked because nobody consulted the Assembly about giving the project, which, among other things, entails building the world’s tallest building on its soil. Sindhi nationalists got incensed over Prime Minister Pervaiz Ashraf receiving the US tycoon who is accused of rape, child-molestation and many other traits that he shares with his hosts here.

He was also received by the MQM contingent including Governor Ishratul Ibad, who went a step forward by offering him 4500 acres over and above the 1200 acres ‘delivered’ by the PQA. Malik seems everybody in his pocket. Who else can bring an alleged rapist and make the high and the mighty of this land receive him without any notice. “What is going on here?,” asked Sindhi activist Zulfiqar Halipota who led a protest rally in Islamabad. A placard in the rally asked: “How stupid can we become?”

Endlessly, we think. The NAB surprised everybody by advising “the PQA not to sign any concession agreement in violation of RFP, government rules and regulations.” It bragged that it has made mandatory for the PQA to get the contract vetted by a panel of experts also “give a presentation regarding compliance of all terms and conditions of agreement by the Bahria Town.”

The bad news is that nobody trusts the NAB, which is accused as “Bahria’s laundry shop” where they like to take their difficult cases to get a tag of piety. NAB Chairman Fasih Bokhari had his daughter working for Bahria Town earlier. Bokhari, who served in Pakistan Navy when Bahria was in partnership with it, was accused by a lawyer of having clandestine arrangements with Malik Riaz. Many think that the NAB shows interest to take the charge and give a clean chit to Malik Riaz. Only in movies, you might say.

Interestingly, Malik Riaz identifies himself with movie characters. His web site actually shows a long note in his own writing comparing his life with the hero of Bollywood movie, Guru (Abhishek Bachan). His diary, titled “Guru or king-maker,” draws comparison between the life of Malik and the hero. Malik writes that, as Guru, he also grew against all odds. He particularly mentions the climax, where Guru thunders before an inquiry board that “I tried to play it straight but I was obstructed because nothing happened without bribery and corruption.” He goes on to describe that, as Guru, Malik Riaz also had to “open the doors” by whatever it took from “sifarish, muthi garam (bribery) or laathi (stick).” In the process, he says, he made himself rich and everybody else too. The crux is that, as Guru, the ordinary courts could not judge him as it is for the people to decide.

One has to read the story of his life to understand all those TV outbursts that he made. He was simply trying to be Abhishek Bachan. The problem is: the real life is different from the movie world but nobody around him dares to tell him that. His Lordship tried but somehow failed in the end. You have to give him credit that he has actually lived a movie character. He has especially put the movie link on his web site. Pl check this out at http://malikriaz.com/ to understand this phenomenon. 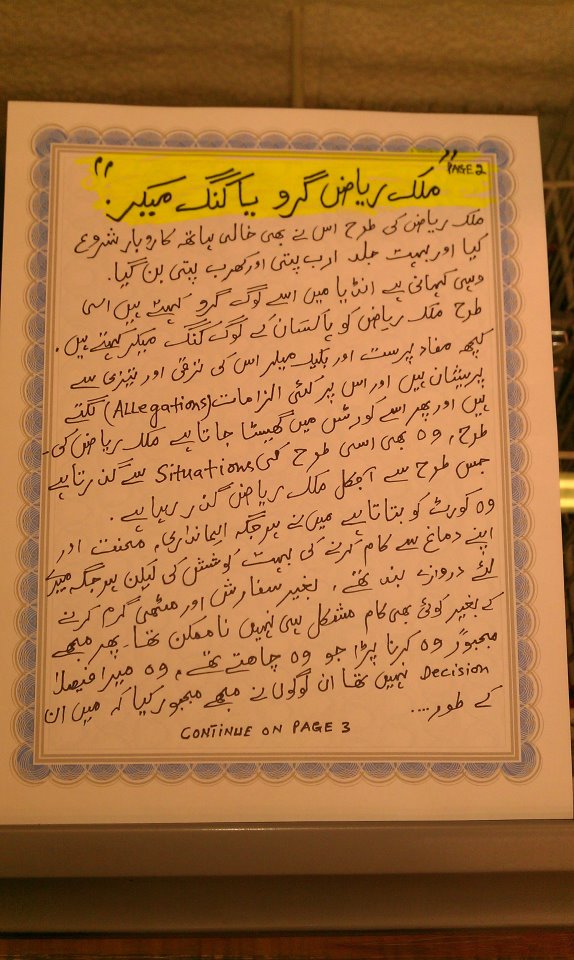 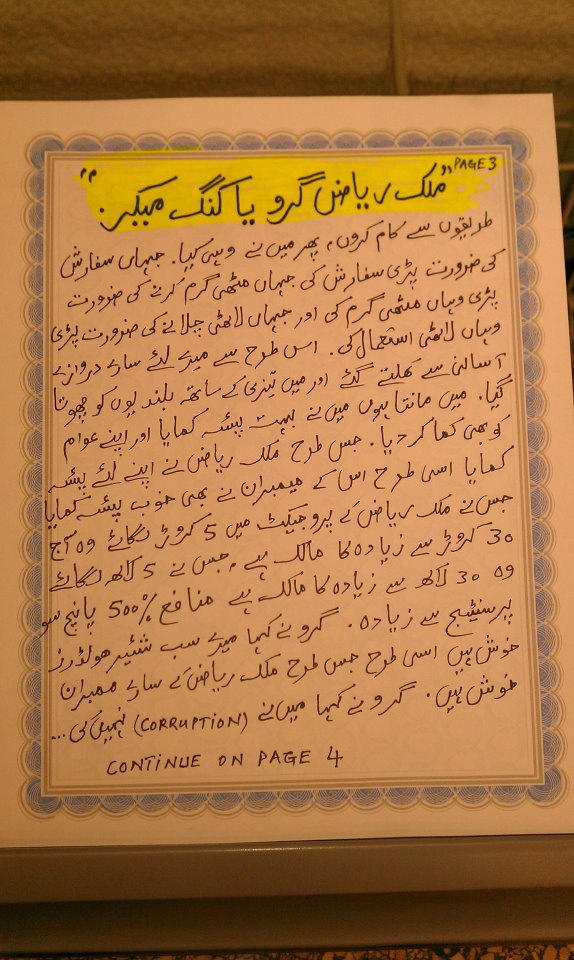 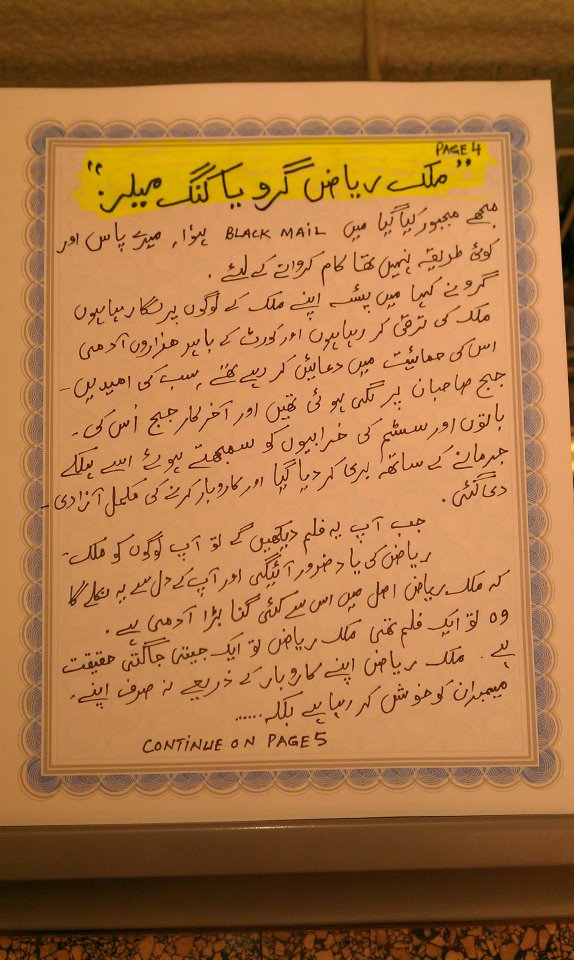 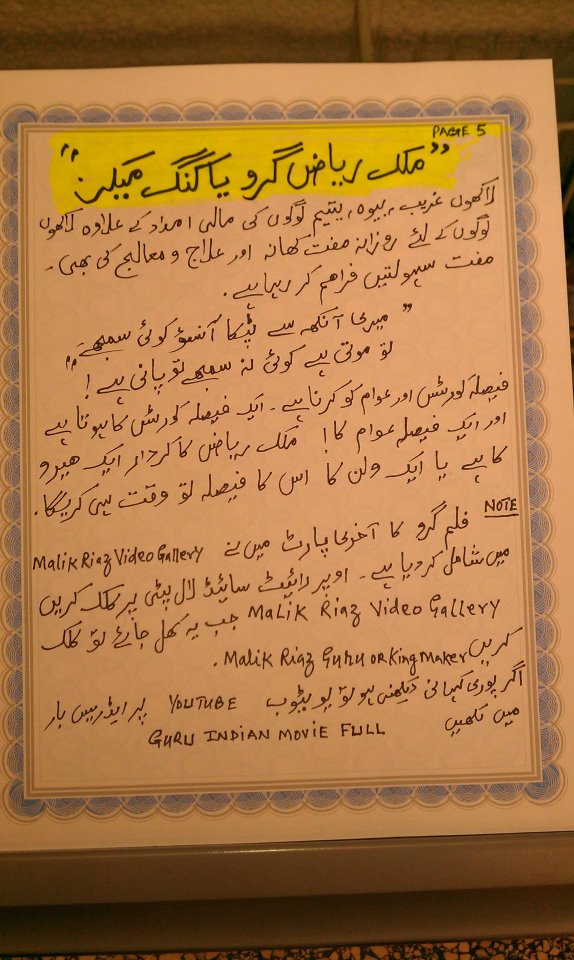